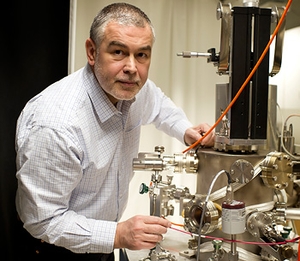 Methanol replacing hydrogen gas as the fuel of the future

Rather than releasing carbon dioxide into the air, it can be used to produce methanol – which is an excellent fuel for cars and airplanes – using solar energy

Rather than releasing carbon dioxide into the air, it can be used to produce methanol – which is an excellent fuel for cars and airplanes – using solar energy. The technology already exists, and a major Nordic research initiative has now been launched that will make the process inexpensive and simple enough to be used on a large scale. Chalmers is heading the initiative.

​Producing methanol using solar energy offers several important advantages compared to other energy systems. Methanol is easy to store, as opposed to electricity. As a vehicle fuel, it is ready to be used in the current infrastructure. Solar energy is the most effective form of generation compared to other renewable sources of energy. This is the point of departure for a four-year cooperation project headed by Dinko Chakarov, professor of physics at Chalmers.”We have worked to produce hydrogen gas using solar energy for many years, for example by studying how different surfaces affect reactions. However, hydrogen gas is still difficult to store and distribute. It is for this reason we have targeted producing methanol, which is easy to use as a fuel.”

Hydrogen gas has been considered the vehicle fuel of the future for a long time, but achieving a functioning infrastructure for the gas has turned out to be more difficult than anticipated. Many researchers across the globe have thus redirected their research the past few years – as a result, for example, of the U.S Department of Energy‘s decision to stop funding hydrogen gas research from 2010, after many years of massive investments in hydrogen economy–related projects.

The hydrogen gas production results produced by Chalmers researchers, however, will be useful when the researchers make the move to methanol. Hydrogen gas is the first step in producing methanol, and both steps are basically catalysed with the same method. First the water molecules are split so that hydrogen and oxygen are formed. The hydrogen then reacts with carbon dioxide, and methanol is formed. Both of the reactions are forced through photocatalysis, which means that solar energy is directly transformed into chemical energy.

Methanol production also means that carbon dioxide becomes a resource – instead of a waste product that is released into the atmosphere as a greenhouse gas.

“Carbon dioxide currently comes from carbon dioxide separation during carbon combustion, for example,” says Dinko Chakarov. “In the future, we hope it will be possible to condense carbon dioxide from the air, which would result in an entirely carbon dioxide neutral cycle.”

The process for producing methanol with carbon dioxide must become less expensive, more stable and easier to use for it to achieve a commercial breakthrough. However, there are already plants in place that produce methanol with the method or use parts of it, and the new research project will combine the different parts by involving seven research groups and companies.

“I do believe a large-scale breakthrough for the method is not that far down the road – perhaps ten years from now,” says Dinko Chakarov. “I am convinced that we are going to improve the process, and it yields very effective usage of solar energy. For example, it is at least 50 times more effective than the ‘shortcut‘ that involves producing methanol from biomass.”

The Chalmers researchers‘ part involves, amongst other things, creating a photocatalytic system that is selective for methanol. They are also working to improve materials that capture sunlight, both in terms of absorbing the light more effectively and absorbing a broader area of the light spectrum. The Chalmers group builds on many years of research within nanotechnology. By using nanostructures in the material, they have previously been able to increase light absorption by over 50 per cent for some systems.

Methanol or methyl alcohol is the simplest of all alcohols, and its chemical name is CH3OH. Methanol can be mixed in petrol or, if slightly modified, be used alone in modern petrol engines. It can easily be transformed into DME or biodiesel and be used in modern diesel engines. It can also be used in fuel cells and be burned in existing power generation plants. Methanol can also be used as a raw material for many of the products that we currently obtain from oil, for example plastics.

This four-year project has received NOK 10 million in grants from Nordic Energy Research. The participants are also contributing an approximately equal amount of money to the project themselves. Seven research groups and companies from all of the Nordic countries are helping provide the different pieces to the puzzle for photocatalytic production of methanol. The project will belong to the international research front line in the field, and it is included in three of Chalmers eight Areas of Advance: materials, energy and nanotechnology.

A workshop and kickoff activities will be held 26-27 January for the project at Chalmers, and journalists are welcome to attend.