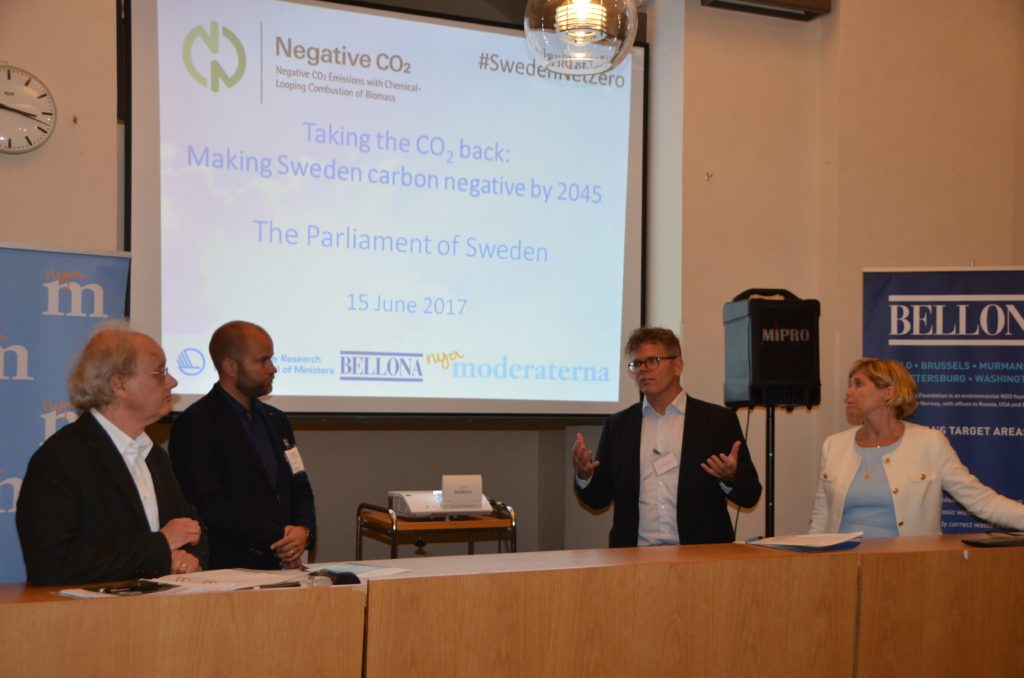 On June 15th, Bellona, Nordic Energy Research and the Moderate Party of Sweden organized the Annual Public Workshop of the Negative CO2 flagship project at the parliament of Sweden

On June 15th, Bellona, Nordic Energy Research and the Moderate Party of Sweden organized the Annual Public Workshop of the Negative CO2 flagship project at the parliament of Sweden.

Central to this seminar was the commitment of the Swedish government to achieve national carbon neutrality by 2045. After this year, Sweden will actively contribute to the reduction of the level of CO2 in the atmosphere, and thereby become carbon negative.

Carbon negative technologies are needed to reach the climate goals agreed upon in the Paris climate accord. According to the IPCC, negative emissions need to be included in most models if the global temperature is to be prevented from rising more than 2°C.

Carbon capture and storage (CCS), the permanent sequestration of CO2 in geological formations, is a necessary tool in the efforts to decarbonize industry. The permanent storage of CO2 emitted when biomass is used, biogenic CO2, allows for the large scale negative emissions.

“One of the main challenges for Sweden when it comes to decarbonizing completely is that as of now it does not have the infrastructure or expertise to deploy CCS on a large enough scale. A potential solution to this could be that Sweden would capture the CO2, which could be transported to Norway for storage in the North Sea” says Johan Verbeek Wolthuys, CCS Advisor at Bellona.

Sweden has committed itself to becoming carbon negative after 2045. Not only is this a promising development in order for Sweden to reach its climate goals, but it could mean the creation of jobs across the Nordic countries.

“The collaboration between Sweden and Norway on CCS could be a win-win situation for both countries. Sweden can decarbonize and reach its carbon negative targets, while Norway can get support in developing a CCS infrastructure as well as a guaranteed flow of CO2,” says Verbeek Wolthuys.

The continued collaboration between the Nordic countries is thus needed to develop a full-scale CCS infrastructure that could be utilized to transport CO2 produced from biomass. Chemical-looping Combustion of biomass, the technology researched in the Negative CO2 flagship project, is a key tool in this effort.

Represented at the seminar were Swedish policy makers, research institutes, environmental organizations, and industries from both Sweden and Norway

Negative CO2 at the Swedish parliament

Svend Søyland, Senior Advisor at Nordic Energy Research, spoke on the importance of continued collaborative Nordic research on CCS. Projects such as Negative CO2 are examples of how an effective consortium can be created where such diverse actors are represented.

Jonas Helseth, director of Bellona Europa, underlined the necessity of negative emissions through bio-CCS and the importance of the immediate development of a large, international CCS infrastructure.This was also presented in Bellona’s report Manufacturing our Future. An example of how negative emissions are to be achieved is presented in the report by Bellona on the producton of biofuels for aviation with marine biomass.

“There is no reason we shouldn’t deploy a Bio-CCS network in the Nordic countries. The technology is there. The first step in developing a CCS network is to invest in an adequate storage site. After this, investments should be made in transportation and storage respectively,” said Helseth.

Johan Hultberg, Swedish Member of Parliament (the Moderate Party), presented the vision of his party to decarbonize Sweden using CCS and Bio-CCS. Cooperation with Norway, he mentioned, is key in this context. Joint efforts to finance a Norwegian and Nordic CCS value chain could be a relevant topic to be discussed, according to Hultberg.

“Because the Nordic countries are too small to deploy and finance the development and deployment of CCS on their own, Nordic cooperation on this is important. I believe that we in the Nordic countries, and I am then considering both private and public actors, have to come together and work to make large-scale CCS installations a reality,” Hultberg mentioned.

Gassnova’s director, Trude Sundset, explained how Gassnova is contributing to the development of a full-scale CCS infrastructure in Norway. Gassnova is a state enterprise responsible for the employment of the Norwegian CCS infrastructure. She explained that the selected Smeaheia field is suitable to store the industrial CO2 from both Norway and Sweden.

“So much CO2 can be stored in the [Smeaheia] field that the annual CO2 of the three facilities participating in Norway’s CCS project would take up only 0.1% of the field’s storage field,” Sundset said.

The Chief of Staff of the Waste to Energy facility Klemetsrudanlegget (KEA) showed with her presentation CCS and negative emissions from the waste incineration that plants such as KEA are ripe for the capture of CO2. Already now a large portion of the waste incinerated at the plant is of biological origin, meaning that negative CO2 emissions can be realized if the emitted CO2 from KEA is captured and stored.

Representing the Swedish cement production sector, Stefan Sandelin, R&D manager at Cementa, mentioned that the cement industry cannot decarbonize without CCS. Not only did he present the possibility of deeply decarbonizing the cement sector, he expressed his interest for the possibility to ship Swedish industrial CO2 to Norway to be stored.

In addition to the keynote presentations, two panel debates were held. One focused on the necessity of negative emissions through Bio-CCS, and the second one on how this uptake of CCS and Bio-CCS can be realized.

Especially interesting was the contribution of Elisabeth Undén, a representative of the Green Party of Gothenburg municipality. According to her, CCS and Bio-CCS are needed to achieve the goals of the Green Party. This is a different stance from those of other environmental political parties in Europe, some of which are staunchly opposed to CCS regardless of the role it plays in decarbonizing sectors that otherwise would not be able to do so.

“The urgency is too high for us to discuss the potential of deploying CCS even more. We have to do everything we can. Why not ship Swedish CO2 to Norway?” asked Undén.

The second debate offered a perspective on how negative emissions can be achieved on a large scale was given by Gassnova’s Trude Sundset, Anders Lyngfelt, professor at Chalmers University in Gothenburg, and leader of the Negative CO2 project, and Stefan Sandelin (Cementa).

“Negative emissions are needed to prevent the global temperature to rise more than 2°C. If we do not implement technologies like chemical-looping combustion to reduce the level of CO2 in the atmosphere it will be an injustice to future generations. We owe it to them to develop this now” said Lyngfelt, speaking on behalf of the Negative CO2 project.

Please find the presentations given at the seminar below.