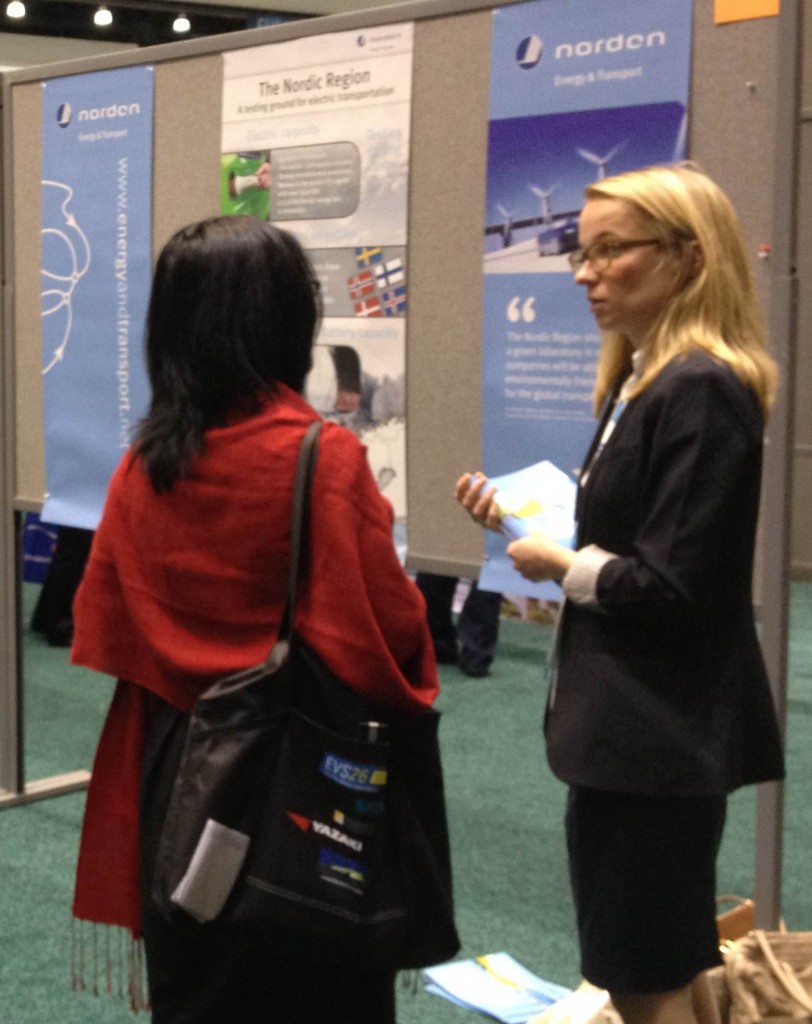 Fast and slow charging in one plug

The Energy & Transport programme attended the 26th Electric Vehicle Symposium (EVS26) in Los Angeles 6.-9. May 2012. The goal for the attendance was to showcase the region as a testing…

The Energy & Transport programme attended the 26th Electric Vehicle Symposium (EVS26) in Los Angeles 6.-9. May 2012. The goal for the attendance was to showcase the region as a testing ground for electric vehicles and to participate in the international Electric Vehicle debate.

The Symposium is the world’s largest electric vehicle conference. This year saw 2000 participants, 200 exhibitors, 47 countries and 100 media representatives. The conference rotates between the US, Europe and Asia.

The Energy & Transport programme presented the Nordic initiative in a dialogue session, where many people from all over the world came over to us to discuss the Nordic issues. There is a lot of interest in the Nordic region, mainly due to the variation in temperature in the region and the challenge for Electric Vehicle usage this brings. One of the electric transportation projects that deals with the temperature issue, Rekkevidde, presented its interim results at the conference.

One of the top stories of EVS26 was the launching of the new combined charging system plug by the biggest actors in American and European car industry. This is a good indication that the industry is preparing for a big roll out of Electric Vehicles.

What is new about the Combo plug is the fact that it combines fast and slow charging, and thus attempts to meet both the need for home-night charging and the need for charging on long distance. It also has smart communication features, making it prepared for the future of smart grid and vehicle to grid (V2G) concepts. The Combo will be introduced in the market in 2013 and by 2017 most European cars should be using this standard.

The last word in the fight over standards is however not yet said. The Japanese have developed wireless charging and showed it for the first time on EVS26. As a driver, all you have to do is park your car in a designated spot, having the wireless charging pad under the car charging automatically. The result is a very easy-to-use system that feels safe and might be appealing both for private and public garage charging.

Another exiting development in the Electric Vehicle world is the electric highway concept which allows also big trucks to drive electric. Big trucks are said to be too heavy to run on battery power and in order to solve this, the electric highway creates a structure in the road that provides the truck with electricity continuously. The structure can be built under the truck, or above or on the side. It allows the truck to attach on and off the “rail” and gives a flexibility that the railway cannot provide. Siemens is running a pilot on an electric highway and showed video from it on EVS26.