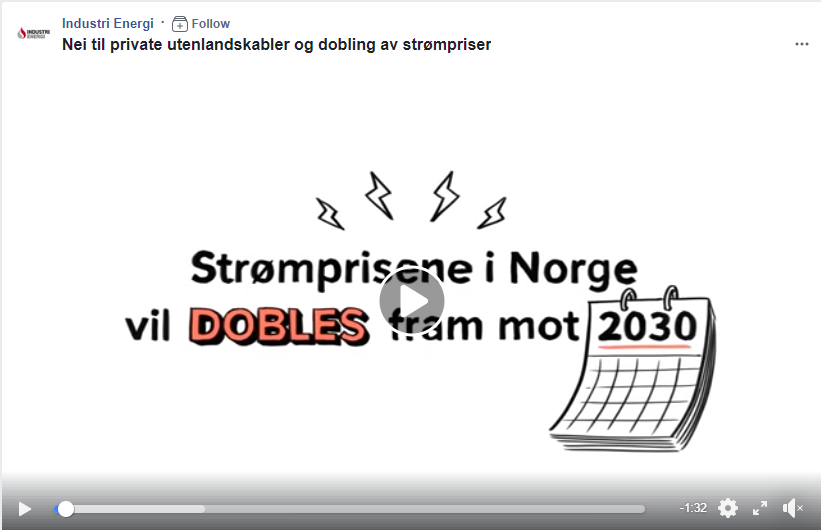 Will electricity prices in Norway double?

Recently there has been some discussion in the Norwegian media, and online, about the likelihood of a doubling of electricity prices on Norway between 2020 and 2030.  A video posted…

Recently there has been some discussion in the Norwegian media, and online, about the likelihood of a doubling of electricity prices on Norway between 2020 and 2030.  A video posted by Industri Energi (an energy labour union in Norway) on their Facebook page in October of 2016 presents a misleading account of an analysis made in the report “Nordic Energy Technology Perspectives 2016 (NETP 2016)”, published by NER in collaboration with the IEA.  The video – which has received renewed attention recently  – states that ‘the IEA report concludes that the electricity price in Norway will double’ and that ‘this is made possible by the building of new cables to other countries.’  This statement paints an inaccurate picture of what the report claims.  Below we will try to clear up the confusion surrounding the report in hopes that a more informed discussion can be held around the topic.

It is important to be clear about the purpose of the NETP 2016 report and its content.  The report is not an argument in favour of any particular energy policy. Rather it attempts to identify the most cost-effective pathway to a carbon-neutral energy system in the Nordic region in 2050, in line with the long-term climate targets of the Nordic countries. The central “Carbon Neutral Scenario” is presented alongside 3 alternate scenarios to offer a range of different results based on varying assumptions.

“There is no one who can say anything definitive about what the electricity price will be so far into the future. What Nordic Energy Technology Perspectives 2016 does is look at the most cost-effective way to achieve a carbon-neutral pathway in the Nordics by 2050.  Under this scenario the report concludes that the total cost to society will be lower if more electricity is traded between the Nordic countries and their neighbours”

Q: What does this report say about the electricity price in 2030?

An important assumption in the Carbon-Neutral Scenario is that European policy will succeed in greatly increasing the price of emitting CO2 (for example through the current tradable permit scheme). This is not a result of the analysis or a prediction made by the report, but an assumption designed to represent European climate policy in line with its ambitious long-term targets.

The assumed increase in CO2 prices, alongside assumed increases in fuel prices, lead to electricity prices in continental Europe and in Norway, Sweden, Finland and Denmark rising, due to the fact that the electricity grids of these countries are interconnected. The report states that “Increasing fuel prices and the surging CO2 price between 2020 and 2030 lead to a steep increase in electricity prices in the system, as illustrated in Figure 3.15.” (NETP 2016, p. 173).

Transmission capacity between the Nordics and continental Europe increases significantly from today’s level in the scenario, but this additional capacity alone this is not the main driver for electricity price increases in the Nordics.

As Mr. Koch explains “The report shows different scenarios for how things could develop. In the scenario where the Nordics become carbon-neutral by 2050, assumptions on increases in fuel prices, surging CO2 prices, and increased demand for electricity all raise electricity prices across Europe. One of the results of this scenario is that there will be a strong increase in electricity trade between the Nordics and Europe, partly because of price difference between the regions, and partly because of more variable renewable energy in the Nordic market”.

“It is also interesting to note that while the scenario shows the Nordic/European transmission capacity increasing by ca. 9GW from 2030 to 2050 (or approx. 1/3 of the 2030 capacity), prices in the Nordics remain fairly stable in the same time-period.”