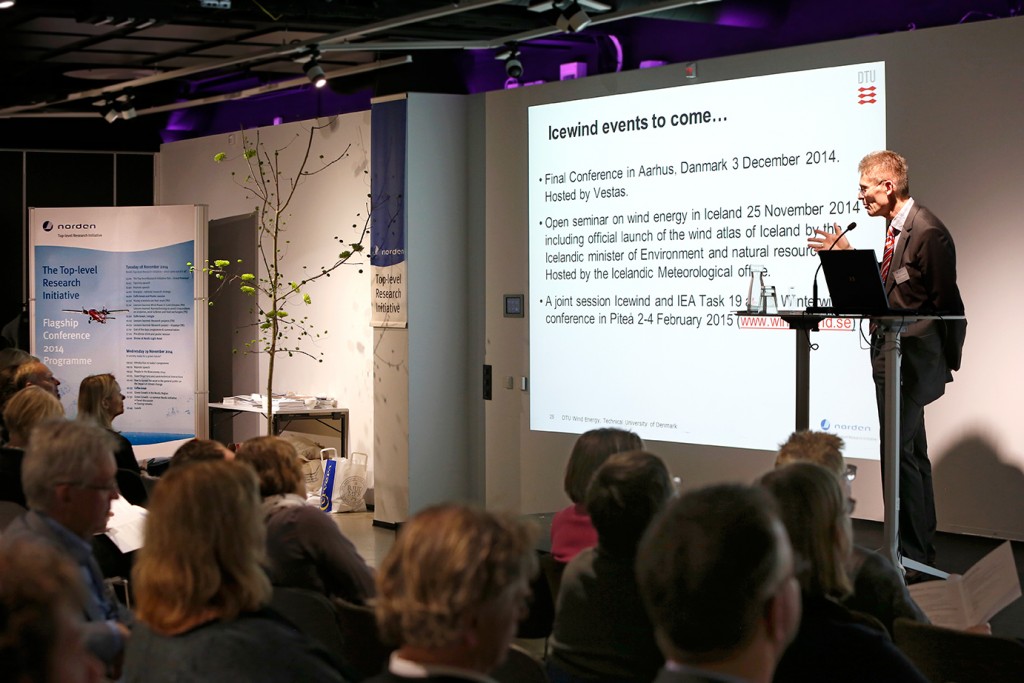 Reduced capacity and halts in wind production are a costly affair. Some of the factors that reduce production outputs from the Nordic wind industry are icing on wind turbines and…

Reduced capacity and halts in wind production are a costly affair. Some of the factors that reduce production outputs from the Nordic wind industry are icing on wind turbines and strong wind and waves that limit maintenance access to offshore installations. ICEWIND has looked to improve forecasting of icing, wind and waves to optimize wind power production.

“The overall objective is to support deployment and integration of wind energy in the five Nordic countries,” says Niels-Erik Clausen of DTU Wind Energy about the ICEWIND project. IceWind has placed emphasis on three areas of particular relevance to the Nordic countries, which are forecasting of icing, integration of wind energy on land, and wave forecasting and use of advanced vessels to improve access to offshore wind farms. In his presentation at the Top-level Research Initiative’s Flagship Conference, Clausen explained that ICEWIND has registered up to 400 kilos of ice on one wind turbine blade. This leads to direct costs for the wind industry due to reduced capacity, while ice throw from the turbines represents a health and safety risk. As an example of icing costs, a two-week standstill in Stor-Rotliden, a wind farm counting 40 wind turbines, would cost in the vicinity of SEK 4 million. “We’ve developed a production loss model, which enables us to predict how much production will be lost due to ice accumulation on the wind turbine blades,” Clausen says. All predictions are compared to observations in reality in order to identify forecasting errors and improve the modelling. Other outcomes include icing maps and wind atlases that allow for more precise estimates of wind power potential in different areas. “We’ve developed an icing map of Sweden, which shows how many hours of icing can be expected in different areas during an average winter,” Clausen says. “This is useful in planning of new wind farms, as it allows you to compare icing costs in different locations.”

While the icing map of Sweden is still in validation, the project’s wind atlas of Iceland has proved to be a popular concept. The publication has been downloaded more than 3,400 times. “Introducing wind energy in Iceland is not about coal replacement or CO2 reduction, as 100 per cent of Iceland’s electricity consumption comes from renewable sources,” says Clausen. Yearly consumption totals 17TWh, three quarters of which is used by energy-intensive industry. “The reason for Iceland’s interest in wind power is that Landsvirkjun, the national power company, foresees an increase in electricity consumption in energy-intensive industry,” Clausen explains. “And they’ve realised that there’s a very good wind resource in Iceland.” IceWind has conducted studies of the wind resource, icing, and issues related to integration of wind energy into the Icelandic energy system. IceWind’s tools have already been used to analyse the potential of the first wind farm to be built in the country. Two 900 kW wind turbines have been erected for experimental purposes.

Moreover, IceWind has explored if better wave forecasting and use of advanced vessels could improve accessibility to offshore wind farms, allowing for more efficient maintenance strategies. These studies have been conducted in three locations in the North Sea. “We’ve analysed 58 years of wind and wave-data from NORA10 to calculate the weather windows,” says Clausen. He explains that wind farms in the North Sea are inaccessible when wave height exceeds two meters.  ICEWIND has counted the number of these occasions and calculated the duration of each event. Preliminary results show that wind farm availability could be improved significantly by using more adequate vessels. “We’ve found that operation time can be extended by more than thirty per cent through use of more advanced vessels, in combination with better wave forecasting,” Clausen asserts.