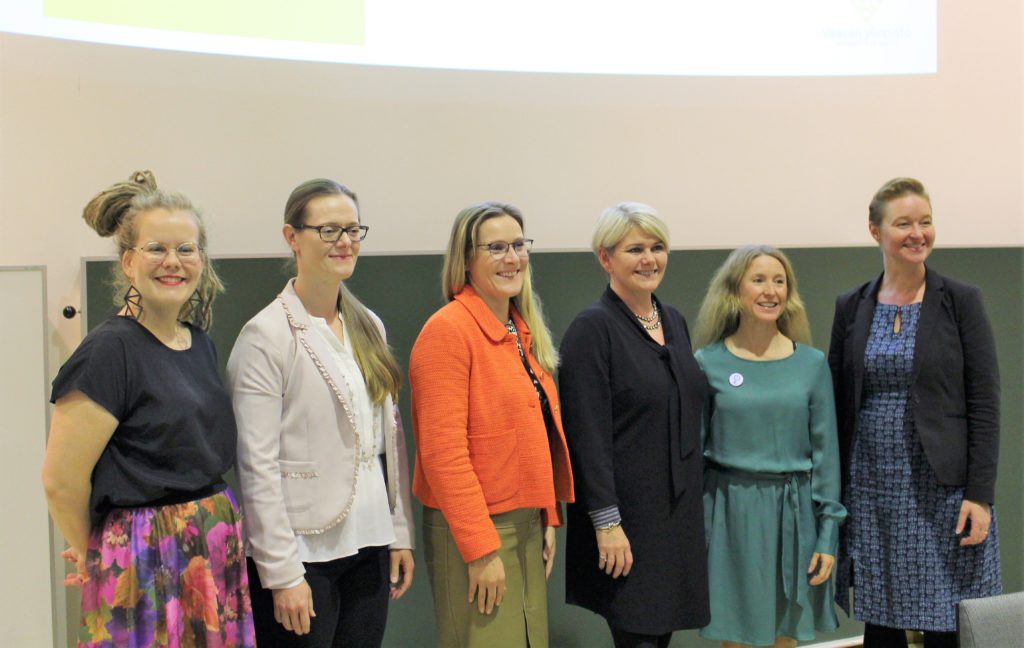 How are women accelerating the sustainable energy transition?

Conference participants gathered on Friday morning to listen to presentations by women in the energy sector from the five Nordic countries. The session “How are women accelerating the sustainable energy transition?” was organised by the Nordic Energy Equality Network (NEEN). NEEN aims to bring voices together from the whole sector such as academia, government and business, and this was reflected by the five speakers’ different backgrounds.

The first to speak was journalist and senior consultant Viktoria Raft, who is one of the initiators of the Swedish network Kraftkvinnorna. Kraftkvinnorna was established in 2015 with the purpose to make women in the energy sector more visible. The network works to highlight role models to attract more women to the sector, and to increase the share of women in steering boards and management groups. Raft spoke about the fact that the energy sector needs to attract more women not only because of the equality issue but simply because it needs to be revitalized; a lot of people are approaching retirement and recruitment of people of all genders is necessary. At the same time, the energy sector faces higher demand for customer friendly solutions and adaptation to smart technology. Raft underlined the importance of attracting people from different backgrounds, cultures and ages, because this mix of diverse perspectives is what will make a difference to make the sector succeed with these challenges.

Next speaker was professor Marie Münster from the Technical University of Denmark (DTU). Münster has worked within the fields of energy planning and renewable energy technologies since 2000 and highlighted in her presentation some of the arguments for equality as a necessary component in the energy sector. She pointed out research showing that climate change can be solved, if women are involved in the workforce. In a so called full potential scenario, where women and men have equal roles to play in the labour market, the global annual GDP could be increased more than enough to fund the battle against climate change. Münster emphasized the importance of every gender being represented, and quoted Carlos Moedas, European Commissioner for Research, Science and Innovation: “Gender Equality is not only a matter of concern for women; it must matter to all of us. If we want to take scientific excellence to the next level; if we want to deliver science-based solutions to the many urgent and pressing global challenges, we need all talents in play.” Münster finished by encouraging women in the sector demand the salary they deserve, promote and give women recognition and supplement each other.

Pirjo Jantunen, business development manager at Helen in Finland, was the session’s third speaker. Jantunen works with the development of smart building solutions and the improvement of organisations’ and stakeholders’ responsibility in shaping the energy system of tomorrow. Jantunen spoke about the importance about diversity at workplaces, again arguing that this is necessary to boost the green energy transition. Different backgrounds create different thoughts, and in the end a more innovative workforce. Jantunen explained the lack of diversity by pointing at the energy industry as quite stable, and when maintaining this stability, the group of employees continues being homogenous. She moved on to talk about research showing levels of bias, and that stereotypes about male and female values run deep in our culture. Jantunen argued that this is visible from childhood and how children are raised, which in the end may affect education and career choices. She stressed the importance of encouraging girls to study STEM (science, technology, engineering and mathematics) subjects, but also that the energy sector should challenge stereotypes and recruit outside STEM as well. Jantunen finished by pointing at a person challenging these stereotypes, climate activist Greta Thunberg, who was clearly in the spotlight after giving a speech at the UN Climate Summit in New York the same week.

Fourth speaker was Karina Barnholt Klepper, senior consultant at Nordic Energy Research, a Nordic organisation based in Norway. Barnholt Klepper is also chair of NEEN and spoke about the process and the drivers that led to the establishment of the network, working for gender equality and diversity in the Nordic energy sector. She followed up on Jantunens message on boys and girls stereotypes and made an example from Norwegian documentary series “F-ordet” where actress and activist Ulrikke Falch investigates how “feminist” has become a negative word. In the series, Falch looks at Norwegian high school students’ choice of education programmes and finds that traditional gender stereotypes in many ways persists, not only in education choices but also when it comes to lifestyles. Barnholt Klepper concluded that there is a substantial challenge ahead, to change societies expectations based on gender roles.

The morning’s fifth and last speaker was Ragnheiður Elín Árnadóttir, former Icelandic Minister of Energy. Árnadóttir brought up the latest report published by Women in Icelandic Energy 2019, “Gender Diversity in the Icelandic Energy Sector”, and concluded that the report shows that things are improving, especially in Icelandic board rooms, but that there still is a long way to go. Árnadóttir confirmed that by her experience, the so-called glass ceiling situations happens often to women in both business and politics. A woman that takes a lot of space is often perceived as a threat. Árnadóttir also agreed with the previous speakers regarding diversity, stressing that diversity makes economic sense and is good for business.

The session continued with a panel debate moderated by Suvi Karirinne, director of Vaasa Energy Business Innovation Centre. Karirinne started by bringing up the fact that the higher up in academia one looks, the less percentage of women there is. What is going wrong?

Münster confirmed that in her field, many women are educated in the field but do not continue as engineers and suggested that part of the reason was so-called stumbling blocks that will make women leave. The balance between family and work life is one of these stumbling blocks and happens for example when classes are scheduled in the evenings, making it difficult for young women with families to attend. Another fact is that researcher’s success in their careers is often dependent on doing a couple of years abroad, which seems to be no obstacle for men but for women it can be a challenge. Raft argued that this again had to do with gender stereotypes and expectations, indicating that there is an unbalance in society. Árnadóttir commented that the general impression is that men and women are equal in 2019, but we are still discussing the same issues since we have not achieved the equality level.

The panel also discussed the issue of quotation and competence. Münster noted that women tend to ask themselves if they are skilled enough for a position and if they were chosen because of their gender. She pointed out that a man would hardly ask himself that, and that women simply need to realise that they are qualified and that this is enough. Barnholt Klepper added that research environments tend to require more of women; more papers and better papers. However, for a woman taking time off for maternity leave, this simply will not add up. Árnadóttir agreed that women often face unfair standards and that there is always a “but”: She is well educated but difficult to work with, she is qualified but might not be able to work overtime, and so on. Árnadóttir concluded by saying that the rules of the game were made by men centuries ago and it needs to change:
“We are finally on the guest list, we are invited to the party, but it is not enough – we need to be the party planners.”

Representing five different countries and five different parts of the energy sector, the speakers clearly had similar experiences as well as outlooks for the future. There was an agreement on the importance of inclusion, diversity and about bringing all perspectives into the task of accelerating the sustainable energy transition. Finally, all agreed that despite its flaws when it comes to questions on gender and diversity, the energy sector is also very fun to work within. The job is motivating and has an impact on sustainability, and the sector definitely has an important job to do with communicating this in order to attract a more diverse workforce.